If you are new to stillwater trout fly fishing choosing the flies to use can seem a bit daunting. Get a head start with the We Fly Fish Pro selection, ten essential patterns that you can use with confidence.  We’ve partnered with Ballantine flies to produce the selection and you can order yours here https://ballantineflies.com/

Our selection is used by professional coaches at We Fly Fish to help newcomers to the sport understand how and when to use the most important classes of flies. These patterns are tried and trusted to produce fish all year round. They provide a balanced coverage of important terrestrial and aquatic insect imitations plus the best of the latest attractor patterns. Here are the patterns we’ve selected and some tips on how and when to use them.

Daddy Long Legs (Crane fly) is a terrestrial fly that often gets blown onto the water.  Can be fished dry (use fly floatant to keep it on the surface) or sunk. Fish static or with very small twitches to imitate a fly trying to free itself from the surface tension.

This imitates the adult non biting midge (Chironomid) that is an important part of the stillwater ecosystem and as a result the trout diet. Try this on a summer day when there are plenty of midge around and the trout are taking flies on the surface. 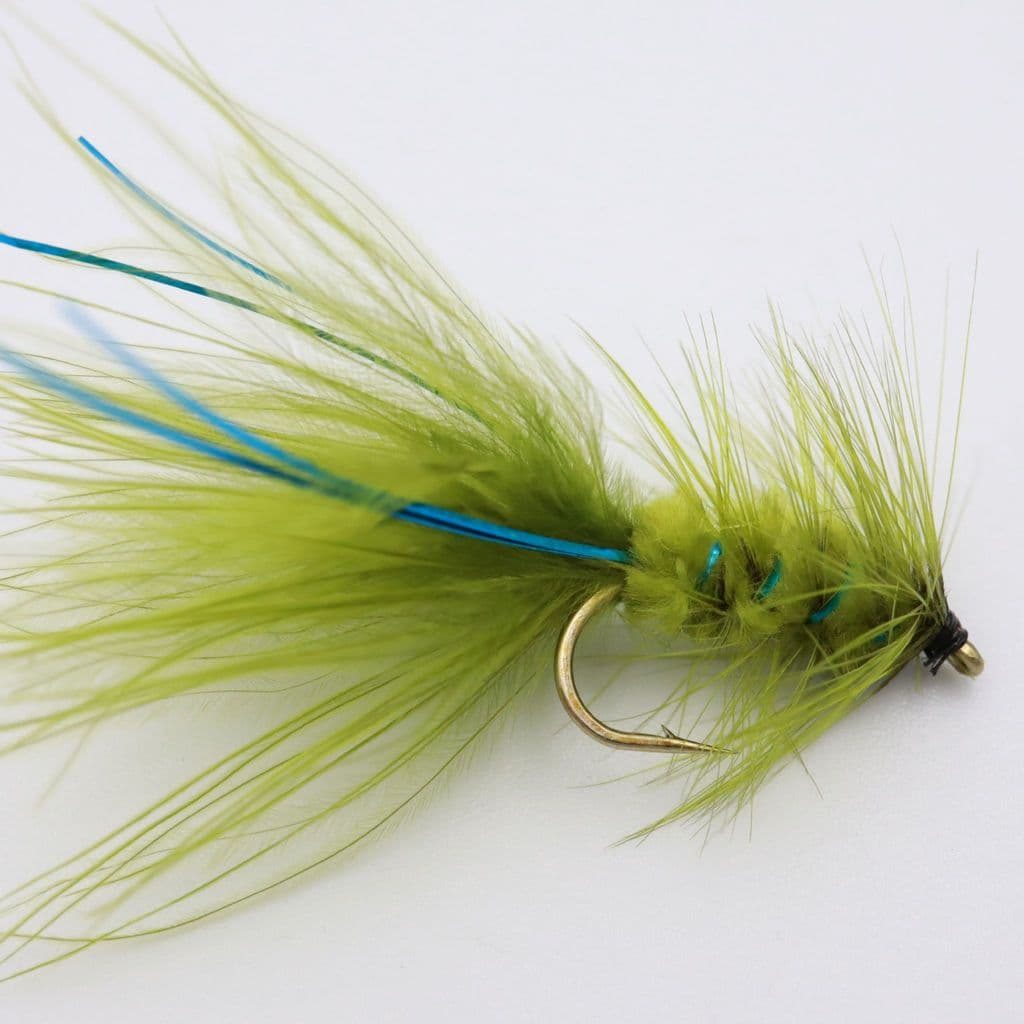 Probably the best all round fly for small still waters. If you look at catch return books this will feature very often. Imitates the larval stage of the Damselfly (or perhaps a small fish), the marabou tail wiggles in the water during the retrieve. Fishes well with a medium to fast retrieve particularly with short, jerky pulls to get the tail kicking. Trout often bow wave chasing this fly. Often trout will make a fast run at the fly only to miss it at the end of a retrieve. If you see this, jiggle the fly using the rod tip, you often get a second attack from a visibly riled trout.

Closely related to dragonflies, the nymphs are predatory and will even eat small fish. https://www.youtube.com/watch?v=RD5wsoycsqI 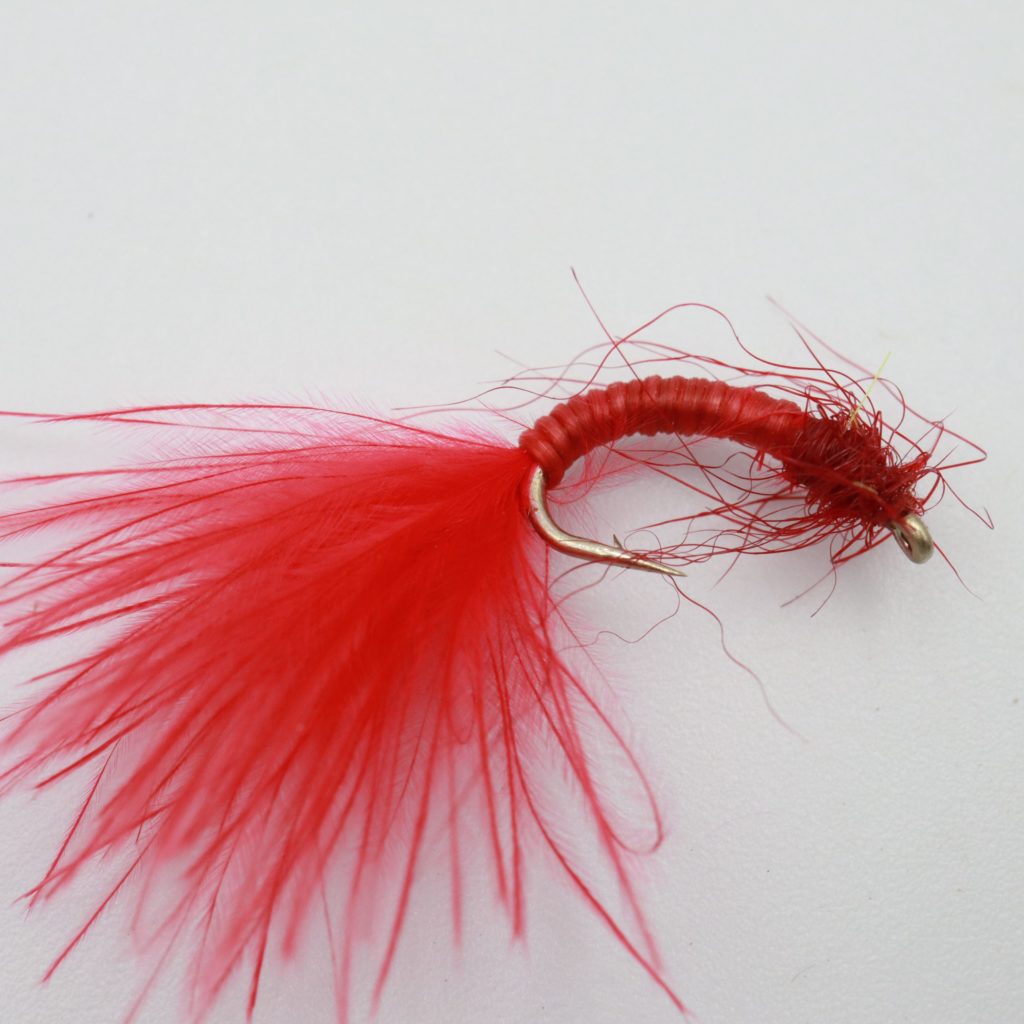 So called because they have high levels of a haemoglobin like substance which allow it to borrow in mud with low oxygen levels to find decaying organic matter to feed on and stay away from predators. Small creatures but very important food items for trout. In a study of several diets for fish, chironomid larval biomass (bloodworm) showed the highest total amino acid content (De la Nolie and Choubert, 1985). Sampling of a lake bottom discovered a density of 5,000 bloodworm per square metre!

This fly is suggestive of the midge larva or bloodworm, fish with tiny twitches or slow steady pulls followed by a pause to let it sink.

Imitates the pupa life stage of the midge, when it rises slowly to the surface to hatch into an adult fly. Moves very slowly making it vulnerable to feeding trout. Fish static with or without a strike indicator, or make a long slow pull then let the fly sink again. Here’s a video of the different Chironomid lifestages:

General imitative nymph pattern and a piece of fly fishing history. Originally conceived and tied by Frank Sawyer MBE, the legendary English River Keeper on the River Avon chalkstream, the Pheasant Tail Nymph is one of the oldest of modern nymphs. Suggestive of Caddis, Mayfly and other larvae. Fish slowly, and vary your retrieve between smooth pulls and short jerks. Watch for a reaction from the fish.

Controversial fly for some purist fly anglers who prefer more imitative approaches. Earns a place in this list by being able to produce fish when all else fails. Slow steady retrieve often the best but try other retrieves as well. Can also be fished static under a strike indicator. This fly doesn’t look like anything natural, and provokes a response from the trout driven by aggression or curiosity. If you feel a bump keep retrieving until the line tightens.

Big fly that often attracts larger fish. Rabbit fur strip produces lots of movement in the water with a sinuous action even at low speed retrieves.Try jerky (short strips) and smooth retrieves (figure-of-eight or roly poly retrieves). Modern design, similar to an older attractor fly pattern called a minkie, but the hook is at the back of the fly which gives more hookups.

Marabou tail and weighted design produce plenty of movement in this lure often triggering an aggressive response. Try it all depths and speeds to search for the fish. Highly visible under water; productive in the winter and when water is coloured by rain. White is a good colour to use when imitating small bait fish.

If you can see trout in the water, are they reacting to fly when they see it? If your fly is seen by several trout and doesn’t produce a follow, or a take, change to something different. Trout have a field of vision that extends as a 120 degree cone in front of them. Depending on water clarity flies that are within 6 feet of them in their field of vision should produce a response.

For the patterns that move a lot on retrieve (e.g. Damsel, Dog Nobbler, Snake), accentuate the movement by using a Rapala knot to tie them on to the tippet. This allows the tail of the fly to kick more, whether you are fishing fast, or slow and jerky. Try varying the speed a different presentation often produces results.

Going to a river? Try the Muddler Daddy, PTN, Klinkhammer, Black Gnat but check the rules. Some rivers have an upstream dry fly only rule.

Some venues allow the use of multiple flies (again check the rules) one way to rig this is to have a dropper (short section of tippet with a dropper fly attached) and one on the end of the tippet called the ‘point fly’. Some good combinations to try are Muddler Daddy (dropper),  Bloodworm or buzzer (point), or Blob (dropper) and Dog Nobbler (point).

Another tactical approach is using a strike indicator. These are detachable floats that attach to the tippet and give a visual indication of a bite, but more importantly set your fly fishing at a maximum depth. If you see fish cruising in the top 2 or 3 feet set the fly at that depth, if not fish fish deeper. Cast out, straighten the line and wait. If current or wind puts a bend into the line pull to straighten – you need to be able to strike quickly when you get a take. Flies to try from the selection using this approach are Black Buzzers, Bloodworms, PTN and Blob. Alternatively if you have some fly line floatant use this on the rod end of the leader (not the fly end) to grease the line. This has a similar effect of setting the fly at a desired depth and is easier to cast, but loses the visible bite detection.

If you’d like to book a coaching session to find out how to fish them in practice, get in touch https://weflyfish.co.uk/contact-us/ 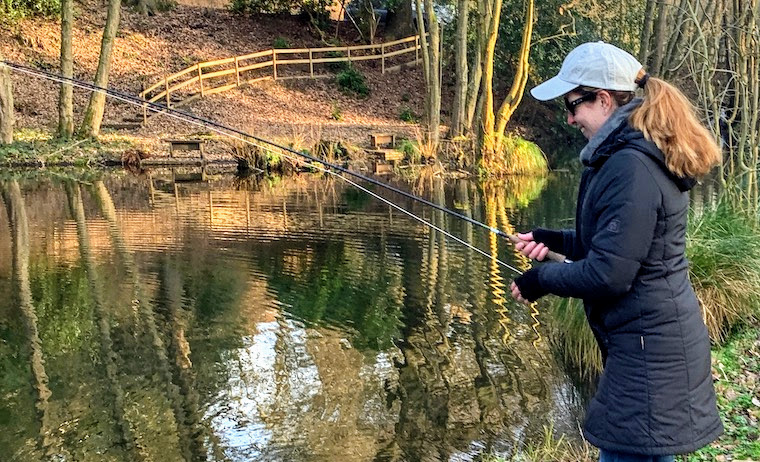 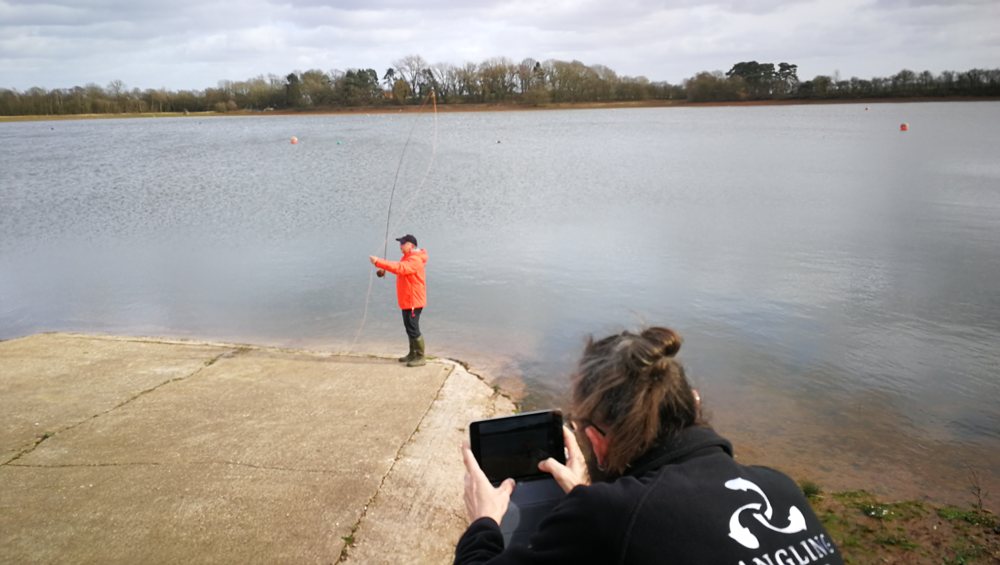